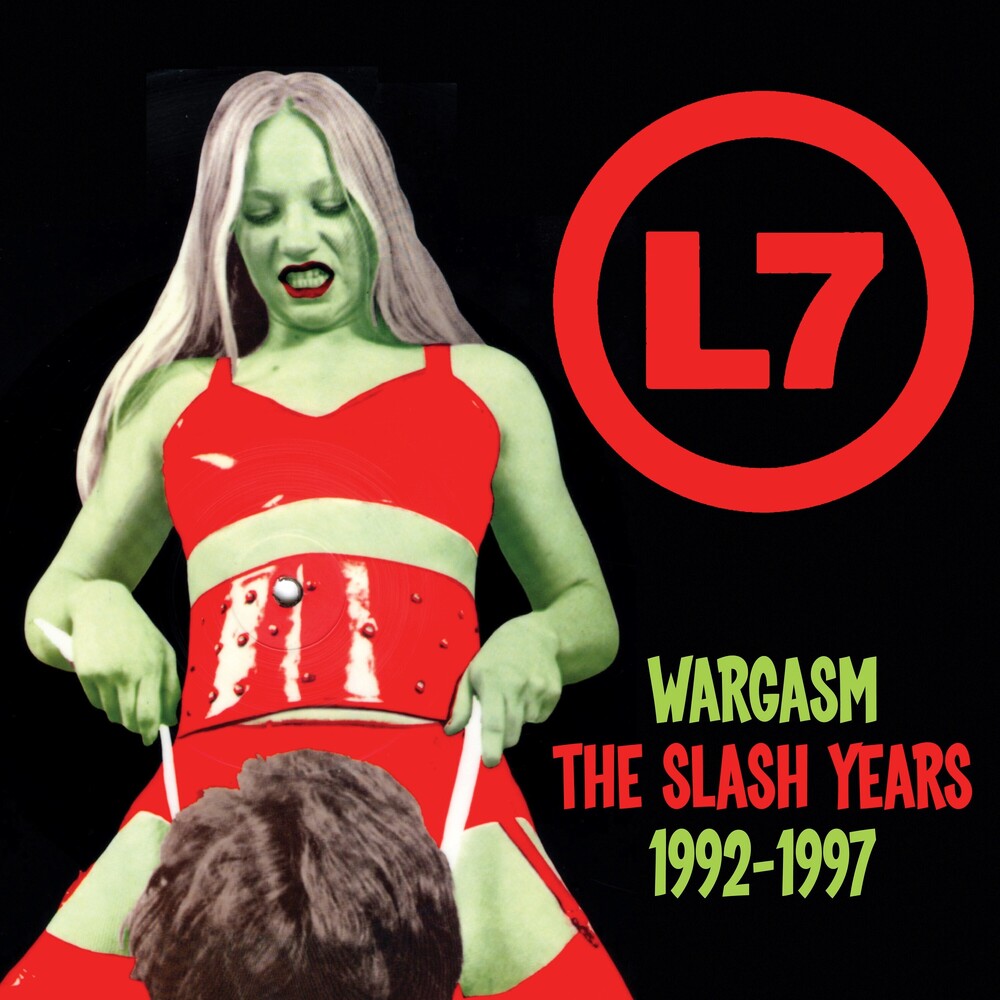 L7 originally formed in Los Angeles in 1985 when Suzi Gardner (guitar, vocals) and Donita Sparks (guitar, vocals) joined forces with Jennifer Finch (bass, vocals). An all female band in a traditionally male-dominated, often sexist rock arena, L7 were happy to court controversy through spirited, occasionally infamous live performances, whilst playing songs often infused with humour as much as bite and bile. Through Rock For Choice they proved to be a band with a sociopolitical conscience too. Having emerged from LA's art punk scene, their music was a mixture of hard rock, alternative rock and punk rock, but they are arguably most synonymous with the grunge movement of the late 1980s and early 1990s. Releasing their self-titled debut on Epitaph Records (home of The Offspring and Bad Religion), their grunge credentials were cemented by the release of second record "Smell The Magic" on Seattle's Sub Pop, some-time home for many grunge lynchpins, including Nirvana, Soundgarden and Mudhoney, among many others. In 1990, the classic line-up was completed by Dee Plakas on drums. Signing to Slash Records (Faith No More, Violent Femmes), they released their major label debut "Bricks Are Heavy" in 1992, produced by Butch Vig (Nirvana, Smashing Pumpkins, Garbage). Lead single 'Pretend We're Dead' gave L7 a massive worldwide hit, especially in the States, followed by the singles 'Everglade' and 'Monster'. The expanded edition of "Bricks Are Heavy" includes 'Pretend We're Dead' (Edit), 'Lopsided Head' (B-Side), 'Used To Love Him' (B-Side), a cover of the tongue-in-cheek Guns N' Roses track and 'Freak Magnet' (B-Side). Touring with Nirvana and Hole, as well as appearing on the main stage at Lollapalooza, L7 followed up "Bricks Are Heavy" with "Hungry For Stink" in 1994. Featuring the single 'Andres', this expanded edition features 'Baggage' (Live), 'Punk Broke (My Heart)' (B-Side), 'Stuck Here Again' (Edit) and 'Interview' (B-Side). During the recording of their third Slash record, Jennifer Finch left the band, eventually replaced by Belly's Gail Greenwood. Their fifth record, "The Beauty Process: Triple Platinum", was released at the beginning of 1997, and although their shift in direction received plenty of critical praise, it was their last album for Slash Records. 'Off The Wagon' was issued as a single, with the B-Sides 'Guera' and 'Worn Out' included as bonus tracks, alongside 'Drama (Piss Off Version)'. L7 would record one more album during the 1990s before calling it a day in 2001. They would reform in 2014, touring extensively, and enjoying a creative renaissance, releasing their seventh album "Scatter The Rats" in 2019. Packed with bonus tracks, artwork and memorabilia, WARGASM - THE SLASH YEARS 1992-1997 includes a new, extensive liner note based on interviews with the band.